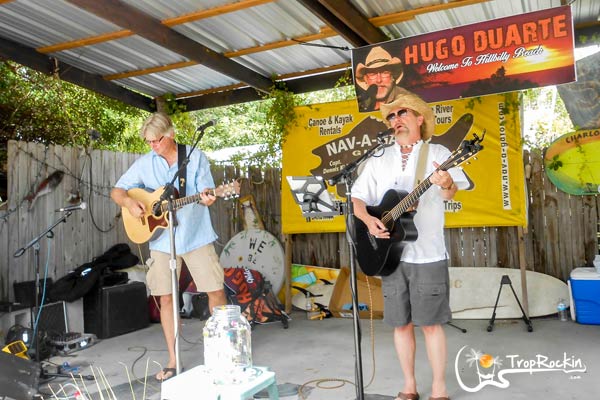 “Come Together Right Now” …and so we did… in this writer’s opinion, so well even The Beatles would be proud!

Sharing & Caring and enjoying ourselves while we do it…isn’t that what Trop Rockers do best? On the last Saturday in May it was just one more chance to prove it — once again, in true partying with a purpose style.  Trop Rock music lovers from all over the country gathered at Southwest Florida’s Nav-A-Gator Grill to show their support for one of our own Trop Rock singer/songwriters, Mr. Hugo Duarte.

Being near and dear to so many hearts, Hugo’s friendship and powerful music inspired dozens of fellow musicians, fans and friends to show up (rain or shine) and donate their talent, wares and effort to raise funds to aide Hugo as he faces his fight with cancer. 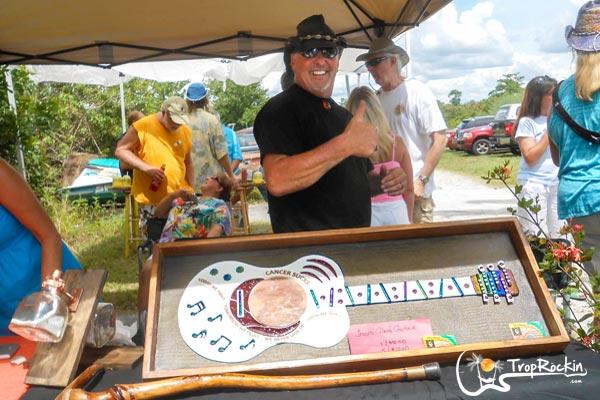 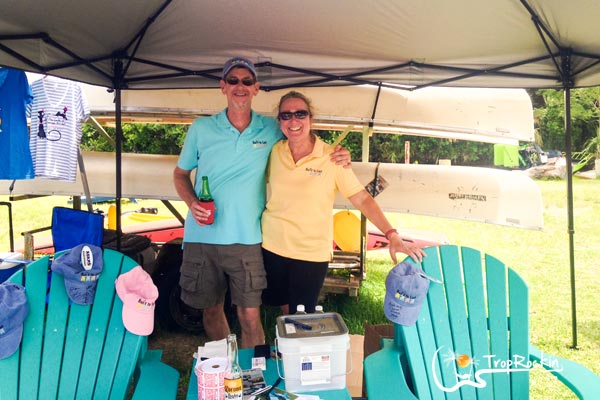 The event was the collective brain child of James “Sunny Jim” and Adela White along with Renee Marquiss.  Like so many of these gatherings, the entire day’s line up was broadcast live on Song Writers Island radio show so Hugo and a vast listening audience (the station’s largest to date) could tune in. 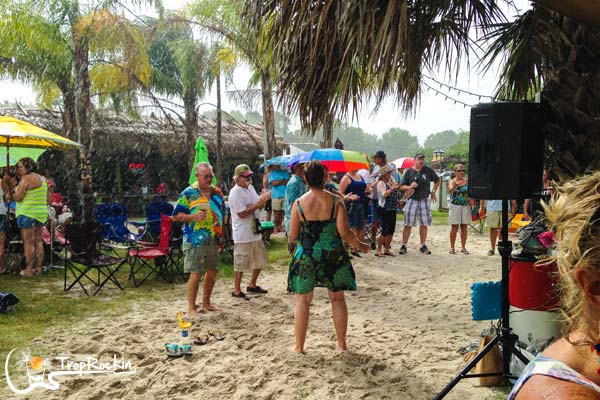 Even with a Florida afternoon rainstorm, the party kept going and fans were dancing in the rain! 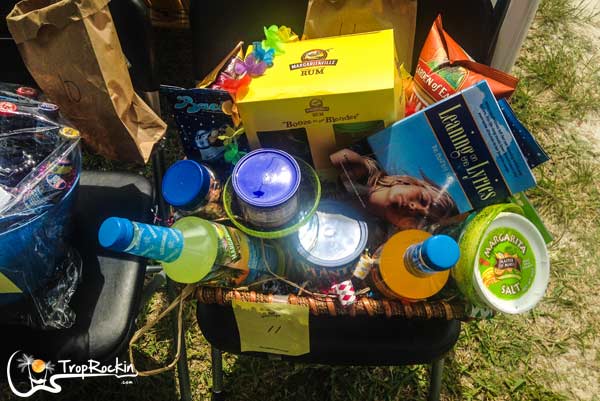 One of the many raffle donation baskets to help raise funds.

While on break from my shift circulating with the 50/50 raffle, I had the chance to visit briefly with a few of those in attendance. One encounter I want to share was with fellow Hugo fan, Bruce Kudick, who made the trip that day from Elkhorn, Wisconsin. Earlier in the week, while reflecting on how I might approach writing about this event other than sharing my own personal Hugo story (which I’ll do later), I decided to pay a visit to the Facebook page dedicated to communicating with and sending encouragement to Hugo: Love & Support for Hugo.

There, among a sea of well wishes, one post in particular caught my eye. It was a handwritten note to Hugo on yellow notebook paper. When I got to meet and ask the sender of the note to tell me more about what inspired it, Bruce Kudick shared: “The first time I had that opportunity and the pleasure of meeting Hugo was about five years ago at his fan appreciation party during MOTM (Meeting of the Minds annual music convention) in Key West.”

Bruce continued, “Hugo invited Dennis Davis to come and perform. Dennis did a song called ‘The Bridge Builder’ and Hugo sat down and started crying and it made me all emotional and I started crying too -it made me think of my father and the bridges he built for me- and now this whole process of what Hugo’s going through today made me think of all of the circle of friends that he has and how we have a circle of prayers and friendship that will help him cross this bridge too.” 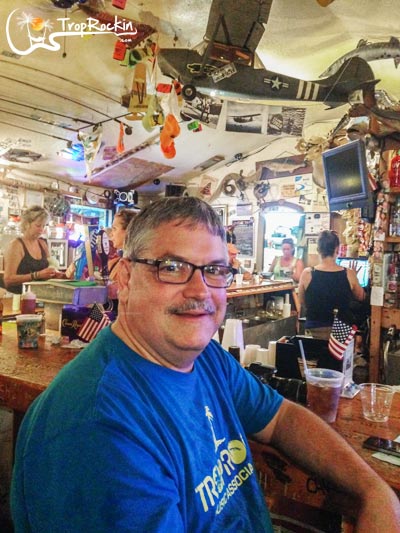 Bruce Kudick showing his support all the way from Wisconsin

I also got a few minutes with singer/songwriter, John Friday, also known as the Coastal Cowboy, based on his autobiographical original song (no doubt, part of what earned him the 2013 Trop Rock Music Association’s “Horizon Award”, as voted by fans). After his set on stage, John was happy to give me a recount of the first time he met fellow musician, Hugo Duarte.

John told me: “A few years back, I hadn’t actually met Hugo. I knew who he was but we hadn’t met yet. That was at a time when nobody was really wearing western hats (the straw type). Hugo & I were at the Floridays event together and as we were coming off stage, we passed each other and looked at each other & both of us said, ‘Nice Hat’! And now especially when I think about his song, ‘Don’t Be Fooled by the Hat’, I think that Hugo kinda really started that trend. And I think that Kenny Chesney must have copied Hugo!” 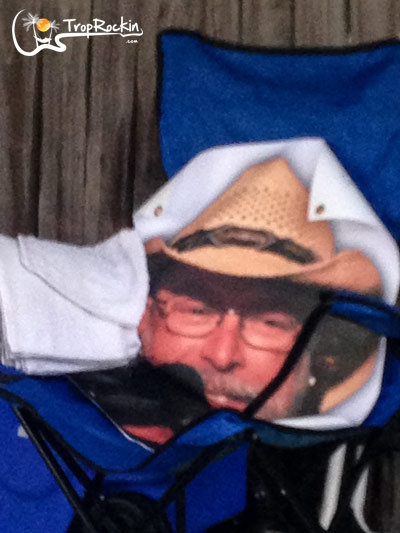 On Hugo’s website, he tells you “Welcome to Hillbilly Beach” and his music is described: “like good Cuban food,… a combination of a little bit of this, a little bit of that, and a whole lot of down-to-earth ingredients that come together in an adventure of the senses.”  In this fan’s observation, Hugo’s performances are pure heart & soul delivered by a group of musicians with a strong work ethic and true love for what they do.

During one of his shows at Hogs Breath Saloon in Key West, I was able to share with this scruffy teddy bear how my husband’s name is Hugh & our oldest son also carries the name, only he is more often affectionately called, “Hugo” since his younger brother’s first complete sentence was “where’d Hugh-go?!”

And since I’m all about lyrics, I’d like to share some words of wisdom from Hugo’s above mentioned song: “seeing only with your eyes keeps you blind as a bat. You’re probably missing something cool under the hat.” And to the many fans in attendance and those who listened in, there is plenty cool about Hugo Duarte and the $13,555 raised in his honor that day! 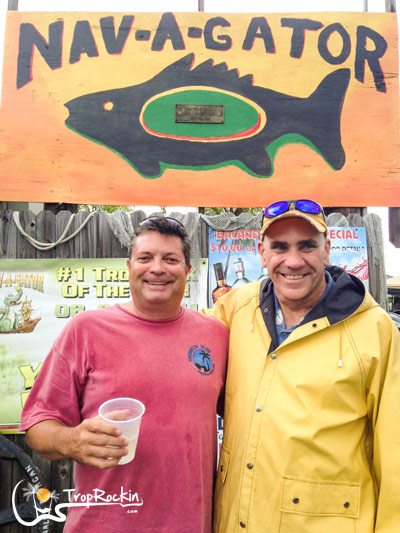 Before the day was over, fans danced in the rain and swayed in interlocking arms to Hugo’s texted-in request, Sunny Jim’s “Fishing in the Milky Way” including the lyrics, “it’s the quiet and the company that makes everything alright” followed by a reading of Hugo’s dictated message to us all: “thanks for lifting somebody up”—it goes without saying that “Same to you, Hugo” was what we all were thinking. 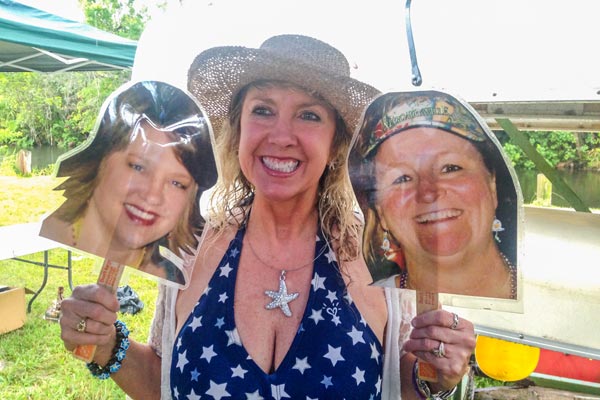 Debbie Hess flew in from Seattle along with her “friends on a stick” who wanted to be there too.

If you would like to contribute, there are several opportunities!

Pay online at Friends of Hugo

Note: ** Please use the online donation option for funds sent from outside of the U.S. This online option was chosen because of the ease of use with foreign transactions.

2.  Email Greg Robinson at portmaster (at) tx.rr.com to inquire about ordering a “Hats Up to Hugo” t-sirt. All proceeds will be given to Friends of Hugo, Inc.

3.  Order the CD, “Chill Before Use” by The Frozen Gringos.  100% of all of the proceeds from sales of this CD go to Hugo to help him with his living and rapidly growing medical expenses. The CD features Hugo Duarte and Jeff Pike, affectionately known as The Frozen Gringos.

Order from Jeff Pike’s website at: http://www.jeffpike.com/store/jeff-pike-cds/  Look for “Chill Before Use” in the left hand column.

Great article Linda! Thanks for the support!

WOW, what a well written article, reading this gave me goosebumps as I sure it does the man himself! Congratulations on the funds raised and BRAVO to everyone who worked so hard to make the event so much fun and certainly one to remember! Looking forward to more articles by Linda Hebert. Keep on "Leaning on the Lyrics" girl and Trop ROCK ON!