With his laid back, beach folk style, Charlie Imes‘ first album titled “On An Island” was nominated for “Best Americana or Country Album” by the San Diego Music Awards. Originally from the the west coast, Charlie recently relocated to Florida from where he continues to tour extensively across the U.S. Charlie tells us in colorful detail about how he and fellow Trop Rock artist, Donny Brewer, wrote the song “Gypsy Soul.” He describes just how he and Donny collaborated musically and how they recorded the song in Donny’s Winnebago for “The Winnebago Tapes, Volume 1” CD. Here is Charlie Imes’ story behind the song: 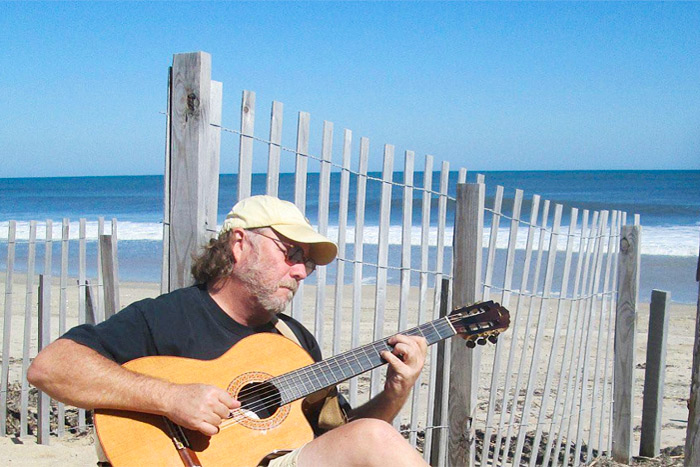 The genesis of the song came to me on my Drive America Tour in the summer of 2015 as I was driving through the Midwest. A line popped into my head. “I’m leaving behind a trail of sand as I bring my beach all across this land.” Bam! I jotted down some more thoughts, but I was driving so they were scribbled and barely legible. My next stop was in Chicago where I was staying with my friends Bill and Kristin, and while they were at work, I hung out by the pool and finished the lyrics. I picked on the guitar for a while without finding a tune that worked for me, so I shelved the lyrics for now… and forgot about them.

Then in the spring of 2016, I moved from San Diego to Anna Maria Island, FL, and along the way, toured with Rob Mehl for the entire month of May. We had a blast, and as the month was nearing its end, our buddy Donny Brewer was in town playing at the Habitat, just up the road, so we got to hang out a little. Donny told me he was working on a new album in his Winnebago, featuring collaborations with several other artists. “I need a Charlie Imes tune on this. Let’s do something.” (He asked Rob too, but they ran out of time.) I said sure, I’d be in Texas soon and I could meet him somewhere to see what happens.

Two weeks later, I pulled off of the highway in some little Texas town and found the motor home park where Donny and his wife Michelle were hunkered down for a few days. We cracked open a beer, had a few laughs and broke out the guitars. I just started playing some chords off the top of my head and Donny, being the brilliant guitar player that he is, started jamming along. After about 10 minutes or so, he said, “Ok… let’s write something. What should we write about?” We had just started kicking around ideas when I looked in my iPad and found the lyrics to Gypsy Soul, seeing them for the first time since I had written them. I said, “Wait… here’s something I wrote last year” and I read the lyrics. Donny exclaimed, “That’s it! What’s the music like?” I replied, “I haven’t written any.” Donny said, “Perfect. Let’s do it. What about that thing we were just jamming on?” I started playing those chords again and singing the words and it fit like a glove.

Working with Donny was a blast. His mind is so quick and he has these brilliant ideas. It was like, “How about this chord here and stick this transition chord in there? Then let’s move this part over here.” We trimmed some of the words to make it fit the tune better and the next thing I knew, Bing, Bang, Zimzala… it was done. We recorded a scratch track so we wouldn’t forget how it goes and looked at our respective touring schedules for a chance to get together again to record the final version.

As it turned out, he had a week to kill before some shows in Indiana, right around the same time that I was going to have a week or so staying at a friend’s lakeside cabin in Benton, Illinois. I would have the place pretty much to myself, so I invited Donny & Michelle to park the Winnebago there and we finished recording it that week. I layed down my guitar, lead & backing vocal parts and Donny did the rest.

I didn’t get to hear the final track until just before the album was released and I thought Donny did an awesome job. He’s a great writer, player, arranger, producer and friend, and I look forward to working with him every chance I get. Thanks to Donny & Michelle, Bill & Kristin in Chicago, and also to Scott & Stephanie Hall, Dave & Diane Daily and John & Mary Meile for their gracious hospitality at Lake Benton.
— Charlie Imes

Listen to a snippet of Charlie Imes and Donny Brewer performing their song “Gypsy Soul”:

This post contains affiliate links at no extra cost to you or the artist! If you purchase through the links below, we receive a small commission from Amazon or iTunes for helping market the song and the artist receives their full payment.

Do you have a Gypsy Soul? Download your own copy here:
Amazon: Gypsy Soul
iTunes: Gypsy Soul