I made a last minute decision to attend the Jimmy Buffett concert in Tampa, which is part of his 2017 “I Don’t Know Tour,” but missed the opportunity to phlock in the parking lot where the Tampa Bay Parrot Heads, Sarasota Bay Parrot Heads and other Parrot Head Clubs were tailgating. The MidFlorida Credit Untion Amphitheater is the largest tailgate venue I have been to and there are several different parking lots.

I knew the Tampa Bay Parrot Head Club had a great tailgate planned with music and a volcano to initiate the concert newbies, but knowing we wouldn’t be able to park near the club, we gave it our best to initiate the Jimmy Buffett concert “virgins” we brought along.

I saw the tailgate party from a different vantage point this time. In our group of ten, six were “Buffett Virgins” who had never attended a Jimmy Buffett concert but were ready to take on all that the tailgate had to offer. Experienced tailgater Donna Danish, made sashes for all our Virgins to wear. 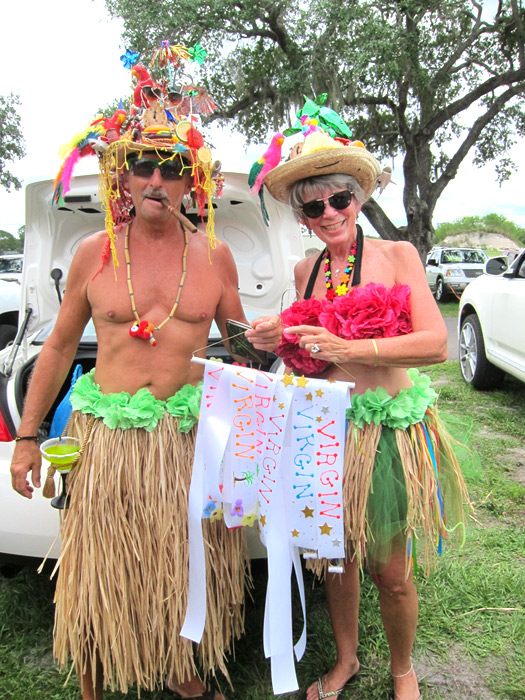 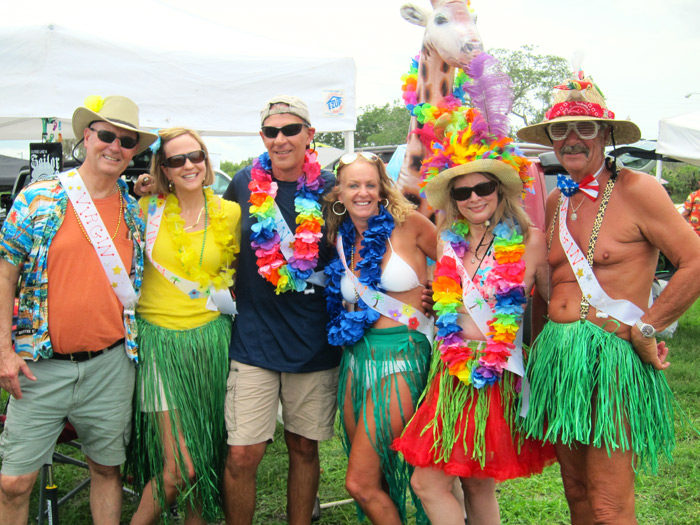 Once we got into the gates shortly after noon, we quickly set up our tents all in a row to create our own little Tropical Zone and began to decorate and set up snack tables, vodka-infused watermelons, Jell-o shots and our favorite cocktails.

Inflatable palm trees, a pop up port-a-potty and even a life-size giraffe decorated our little piece of paradise. If you’re new to Jimmy Buffett tailgating, check out these top 10 must-haves to pack for your tailgate party. 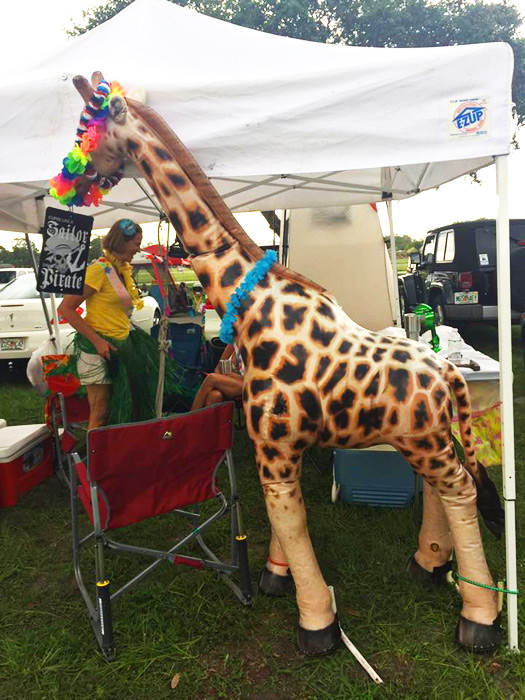 Our group really got into the festive spirit with grass skirts, fabulous hats and flowered bras. Tailgaters passing by stopped to take photos along-side the giraffe. I think our group was the most colorful in the entire tailgate area. Not bad for mostly Jimmy Buffett concert virgins! 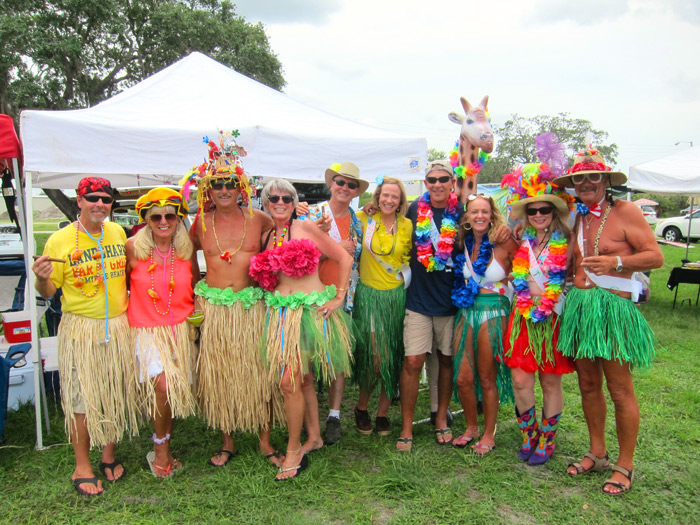 Our friend Joe amazed us with his Parrot Head straw hat. He has been working on it for a long time and it contains items reflecting many of Jimmy Buffett’s songs like “5 o’clock Somewhere,” “Cheeseburger in Paradise” and “Juicy Fruit.” 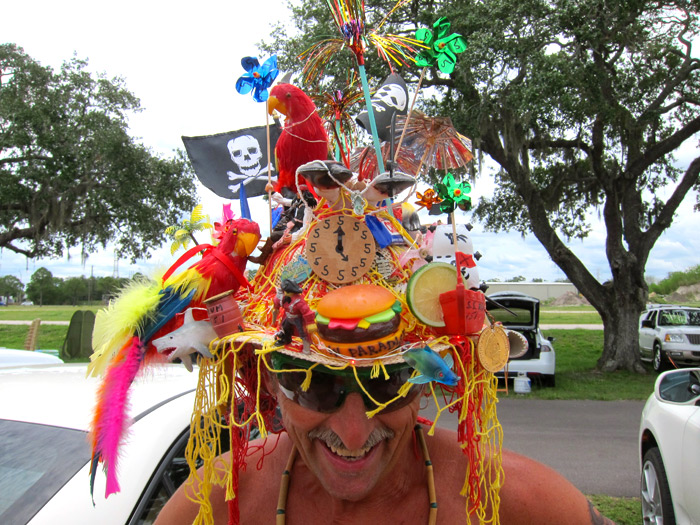 It always amazes me when I see how quickly the sea of pop-up tents, BBQ’s and huge Tiki Bars turn the concrete parking lot into a Margaritaville. Swimming pools start filling up with several large jugs of water, sand underfoot and the music starts to fill the air.

Then it’s time to start strolling around the parking lot and see how creative everyone is was this year. Jimmy Buffett attracts all ages to his concerts and regardless of age, everyone at the tailgate is ready to play! 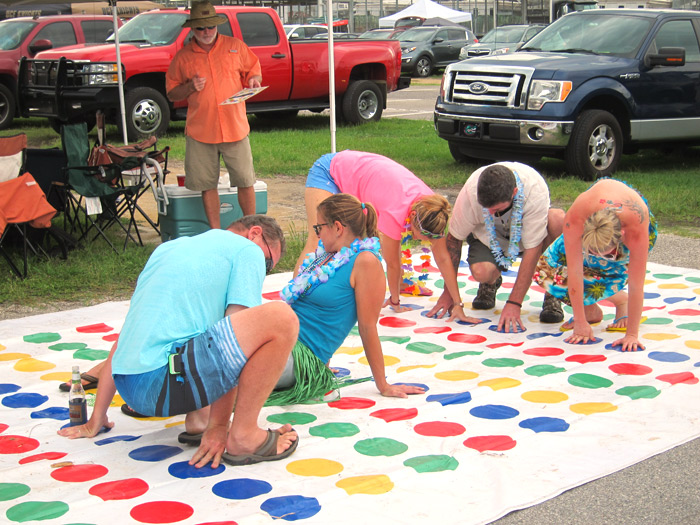 I discovered drinking games I’ve never heard of before. A gigantic Twister game, beer pong, beer corn hole and huge stacks of blocks for a drinking Jenga Game. My favorite is the long paddles with shots for 6 to 8 people and we line up ready to all drink at the same time once the paddle is tilted. Shot glasses filled and ready to go on the count of three! 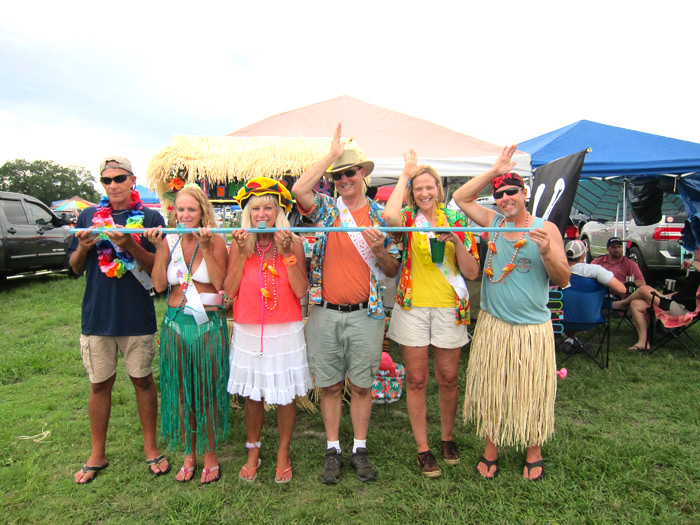 Tailgating golf is a combination of playing a round on the back nine and a pub crawl. Here’s out it works, you set up nine tailgates you are going to visit. At each one, you build some sort of competition. A competition could be counting how many sips it takes for you to down a glass of beer. If you down it all without your lips leaving the glass, it’s a HOLE IN ONE! Standard golf rules apply and the lowest score wins. 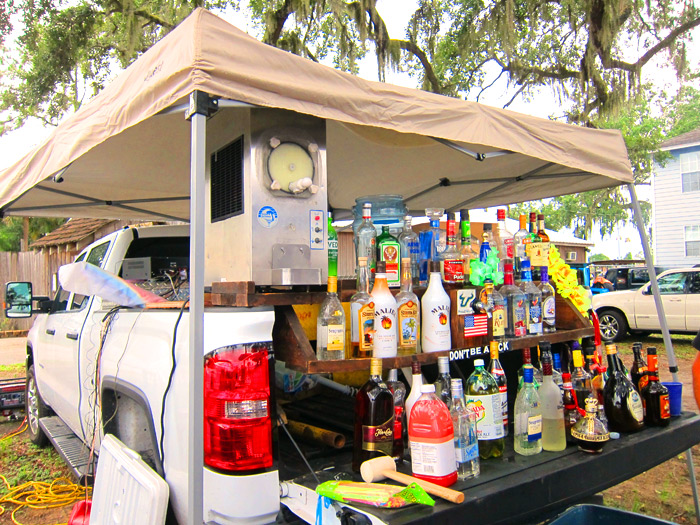 There were portable bars set up everywhere and we had a lively game of Beer Baseball right near our tailgate area. Once up to bat, the brave (or crazy?) person had to drink a bottle of beer out of a baseball bat. Depending on how many seconds it took to drink the beer, he had to spin around the bucket with his head on the baseball bat that many times. If he didn’t fall over after doing that, he was allowed to run to first base. We had to watch for flying bats coming at us when an over-excited player got to run!

There were huge sound systems set up and crowds gathered to see women spinning the wheel to see what their fate would be all in the hopes of getting a Jell-O shot or maybe not? 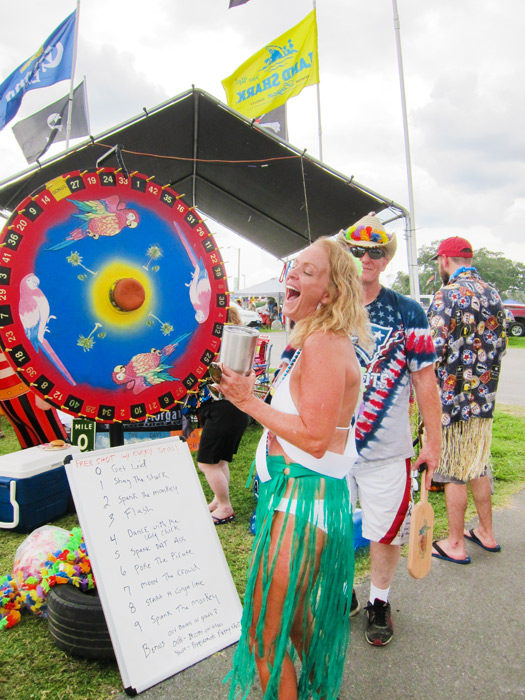 We all had to take a little time out when the clouds opened up for a down pour but it was great to get the rain out of the way before concert time. The sun came out in time to start the BBQ and have our group potluck of burgers, sausages, salads and desserts.

As quickly as the tailgate area sets up, it goes down. As concert time approached, everyone pitched in together to take everything down and then we made our way to the Amphitheater. We had lawn seats this time and got there early to map out our area. The venue was very strict on the size of purse brought in and low beach chairs for seating. 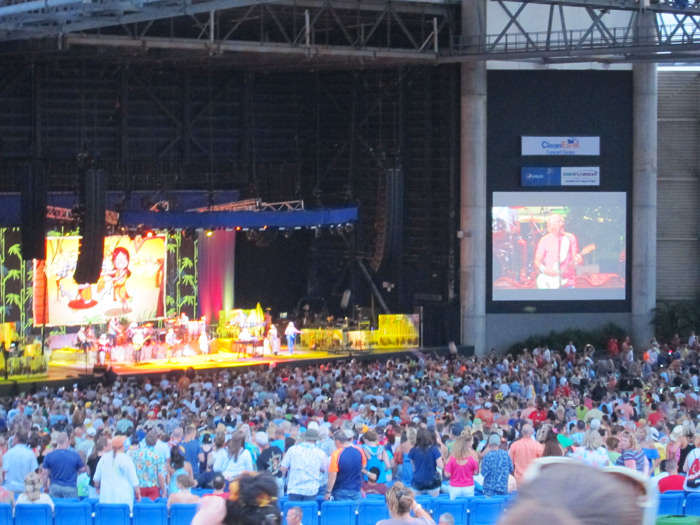 Our Buffett Virgins were excited to take in the huge crowd and many have commented that this was the best Jimmy Buffett concert so far this year. Jimmy played to 19,000 fans who sang along to his songs and Finned to the east and Finned to the west. He played all our favorites and included a Gregg Allman tribute since the famous member of the Allman Brothers passed the week before. Jimmy said “Thank you Gregg Allman of the Allman Brothers for everything you did for us.”

The tailgate and concert were a hit with our friends and I think we did a great job initiating our Jimmy Buffett concert virgins. I bet they’ll be back next year!