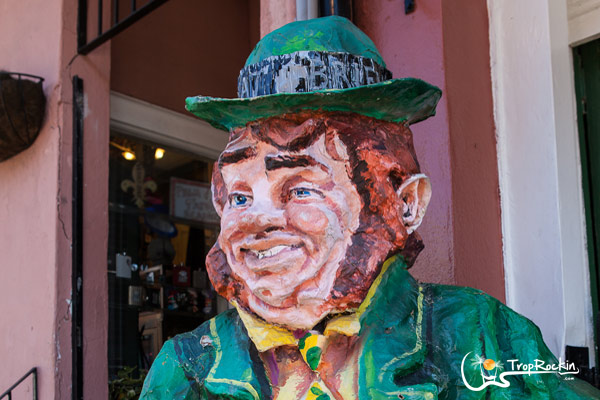 Pat O’Brien’s is easy to find, just look for this Irishman on Bourbon Street

I’ve spent many, many hours in the original Pat O’Brien’s through the years and to me, there is no other place like it. I’ve visited other Pat O’Brien’s locations, but there is something about the dark, crowded piano bar in New Orleans that is unique. And to me, the most unique facet of the New Orleans Pat’s is Alvin Babineaux. Alvin is a percussionist, but he plays the tray. Yep, he plays the tray. 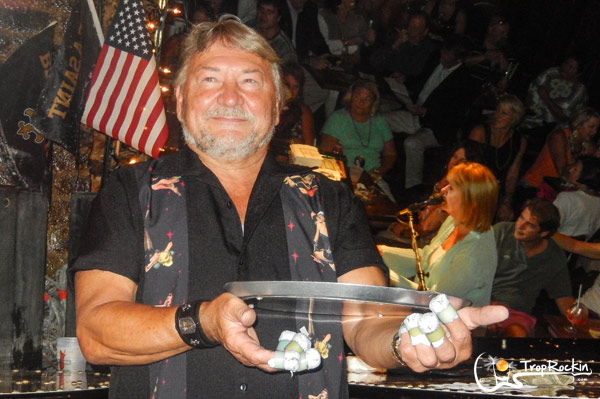 I was drawn to Alvin years ago, when he was introduced as a fellow Texan. And what a performer! Taking a stance between the two baby grand pianos in the piano bar, he rhythmically taps the bottom of a serving tray with metal attachments to his fingertips that look like thimbles. He is always animated, warm and gracious to the customers, and is a true Pat’s institution. I had the opportunity to interview Alvin recently during a trip to my favorite city, New Orleans. At the appointed time, he ushered me out of the bar and we power-walked a block and a half to an upstairs apartment that he rents to relax during his work breaks. Several folks on the street called to him and threw verbal compliments his way and he politely smiled and waved.

Once we reached Alvin’s hideaway, he offered me a bottle of water, grabbed one for himself, and began to tell me about his history with Pat O’Brien’s. His journey started indeed in Texas, where his mom was a big band singer with the Rene Prado orchestra. She and her children traveled and for the last 17 years of her career, Alvin’s mother was a pianist/ singer at Pat O’Brien’s in New Orleans. The first couple of years as a Pat O’s employee, Alvin was a “porter,” meaning that he iced all the hurricanes in the glasses before they were served. But now, Alvin has been on the Pat’s piano bar stage for 43 years! 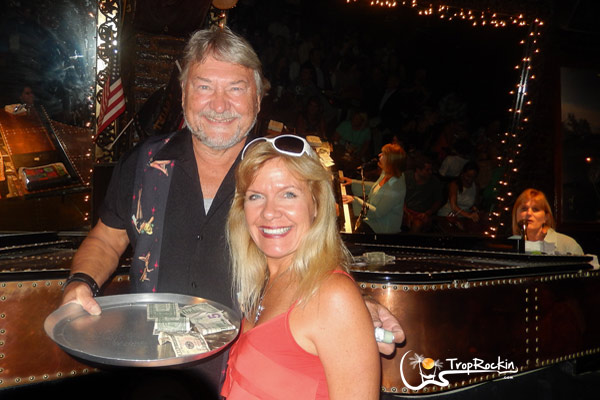 Alvin and Cindy having fun!

Alvin is a true, educated percussionist. He began to take drum lessons at age twelve and he still keeps in touch with prior drum instructors. His best percussion advice can be harder than it sounds: “Put the beat where it goes in the song.”

And what happened when the horrific Katrina came and went in New Orleans?

Alvin describes the aftermath of the storm as being a new college graduate at age 50 – no money, no help. He told me he and his wife lived like gypsies for a while after the storm, living where they could.

Pat O’Brien’s was a refuge for Alvin. He assisted in the cleanup of the historic bar. Part of that cleanup regime was getting rid of all open bottles of liquor. To escape contamination, he helped pour five bars worth of opened liquor down the drain. Ouch! They gave him a key and he piled up the seat cushions in the piano bar against the wall and slept there at night and helped with the immense cleaning effort during the day. He recalls that one of the saddest things to him post-Katrina was seeing cars parked on Bourbon Street, which is usually a pedestrian walkway.

Alvin shared with me that he’s 61 years old, which I find hard to believe! He continues to be on stage in the Pat O’ Brien’s piano bar most everyday, playing his percussive tray and adding to the special, fun ambiance of the place. The last thing he included in our interview was the longtime slogan of Pat’s – “Have Fun!!”

If you enjoyed this story, please share it with your friends!