Jimmy Buffett introduces Scott Nickerson to thousands of fans as “the guy who started the whole thing” during the November 2015, 24th annual Parrot Head convention in Key West. Scott steps up on the stage and takes his spot as the newest Coral Reefer behind the drum set for a one-song performance of “Margaritaville.”  A dream coming true for this talented musician.

Just two weeks before the show, Scott receives a call from Jimmy Buffett’s assistant and long-time friend, Mike Ramos, about an opportunity of a lifetime spurred by Buffett’s recent screening of the upcoming independent Parrot Head documentary that features Scott. Ramos tells Scott “Jimmy wants you to play drums with him for a song at the Meeting of the Minds and have it be part of the movie.”  Scott’s initial response was one of shock and then he asked, “Drums?” Thinking he’s typically known for harmonica and vocals, but Ramos assures him Buffett wants him to play drums because “that’s where you’re heart is at.”

Scott knows the song “Margaritaville” like the back of his hand, but he’s usually playing the harmonica. In preparation for his Coral Reefer debut, Scott researches the latest Buffett performances to capture the band’s favored tempo of the Parrot Head anthem. According to Scott, the coolest part of the song is the opening, “the drums start Margaritaville” and Scott makes sure he’s mastered the intro, “I don’t play exactly like Roger [Guth] but I wanted to make sure I didn’t do anything he didn’t do.”

And what do you wear to the gig of a lifetime? This t-shirt. 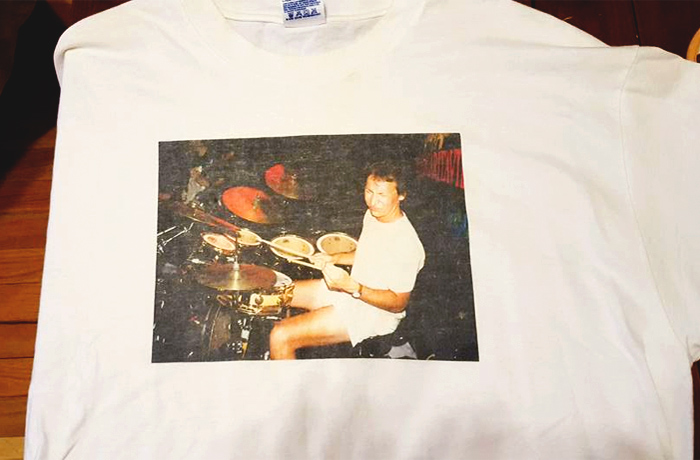 That’s Roger Guth (Jimmy Buffett’s long-time drummer) playing at Margaritaville Key West in the early-1990’s. Scott happened to be playing a gig just down the street at Sloppy Joe’s and stopped in to see Peter Mayer, Jim Mayer and Roger Guth. Scott snapped this great shot and laughingly remembers “I was 2 feet from Roger when I took that picture. He always has that look on his face, those squinted eyes, when he plays.” Scott managed to get an iron on transfer created to put on a t-shirt and two days later he wore it back to Margaritaville for a good laugh with Roger and the Mayer brothers.

Replacing Roger Guth for one song at Meeting of the Minds, Scott knew resurrecting this 20+ year old t-shirt was a must. As Roger exited and Scott entered the stage, the two shook hands and Scott proudly shows Roger his shirt. With a slap on the shoulder Roger laughs and tells Scott he remembers that moment. A few seconds later, Buffett looks at Scott and asks “Are you sure you practiced?” knowing that he did and cracks up when he sees Scott’s shirt. It seems the t-shirt has come full circle.

Why is Scott to blame for it all?

In February of 1989, Scott set out to create the first Parrot Head Club. Made up of like-minded individuals who wanted to have fun as well as make an impact. Scott recalls “I didn’t know if it would hit or miss. We planned our first event to be on April 1st 1989, April Fools Day, thinking we would make it fun.” That first event brought in about 15 people. “We had a few beers, something to eat and made a plan.”

“In the beginning all we were doing was volunteering for different non-profits that had events going on. We took it upon ourselves to call charities and ask if they need people to get their hands dirty.” Soon, the Atlanta Parrot Head Club had around 300 members. Scott remembers “It just took off!” Jimmy Buffett’s people asked Scott to put together the guidelines for clubs and to create Parrot Heads In Paradise (PHIP) the parent organization. Soon they featured Scott and the Atlanta Parrot Head Club in the (now discontinued) Jimmy Buffett printed fan newsletter, the Coconut Telegraph. In the article, they published Scott’s phone number and he says his “phone was blowing up” with people wanting to know how to start a club in their area.

“The first serious person to contact me about starting a club was Jerry Diaz.” He really helped us solidify the guidelines. With around 20 chapters established in 1992, Jerry and Scott hatched the idea to have a Parrot Head convention. Scott says “I have to give Jerry all the recognition for the convention, I hardly had anything to do with it. Jerry came up with the name Meeting of the Minds, had all the connections in New Orleans for venues and he even made the t-shirts for that first year.”

Today, Parrot Head Clubs reach across the United States, into Canada and even Australia with approximately 30,000 registered members and we can all thank Scott for his vision. In asking Scott why he thinks  Parrot Head Clubs have lasted 25 years, he says “it’s a good mix of having a good time, meeting new friends and helping the community. You can go out and drink, eat your cheeseburgers in paradise and do something worthwhile. And of course, there’s the music. It’s always been about the music.”

Not only the founder of Parrot Head Clubs, Scott is a talented percussionist, harmonica player and has a fantastic voice for vocal harmonies. Scott joined Jeff Pike in 1991 forming the original Jimmy Buffett tribute band A1A. With Parrot Head Clubs sprouting up, A1A had a ready made audience. Soon they were playing corporate gigs, a 4th of July gig in Tokyo for U.S. service personnel, hired by Budweiser for an event at the Atlanta summer Olympics and at Parrot Head Clubs all over the U.S. Together for 12 years, Scott says he can’t even describe “the joy of making music for a living.”

In 2002, Scott’s world changed with the diagnosis of a brain tumor. Although the removal of the tumor went well, the complications of the surgery caused a stroke the very next day. The only thing the stroke affected was his ability to speak and Scott explains “I had to learn how to speak all over again.” One of the most precious gifts he received during recovery was a personal video message from Jimmy Buffett.

Scott Nickerson’s short stint as a Jimmy Buffett Coral Reefer has his blood pumping and his passion for making music bubbling over. What does the future hold for Scott? He makes it clear “I want to be in music full-time for the rest of my life.”

A great and interesting story, now I know when and how all the things in our Parotthead world begain.

Thanks Scott Nickerson, Great to see well and at it. You have given Darlene and I So many great Road Trips Sourth of the 49th and gave us the pleasure to meet so many wonderful Parrot Heads. oh yea, and all those Jimmy Concerts.

Motm 2015 was awesome being so close to Jimmy Buffett on stage. My husband and I our both cancer survivors and Jimmy and the coral reefer's music has giving us so much joy we watch their videos and listen to their music every day. Retired and moved to Florida to live the dream. We became Parrothead's enjoyed the story how Scott made it all happen. Thanks for a great newsletter. Living the trop life in fort myers Florida.

How inspiring Marilyn! Jimmy's music really does bring great joy. So glad you enjoy our stories!

Amazing story especially for myself. My name is Scott and as a drummer with the band Highway 1 playing Trop Rock. I had a stroke in 2013 that took only my speech and had to relearn talking also. The odds of another drummer named "Scott" having a stroke and having the same disability from it just makes me glad to be alive. Thank you for such a insightful story.

Wow Scott! An amazingly similiar story. So glad you recovered and get to live your life making music!