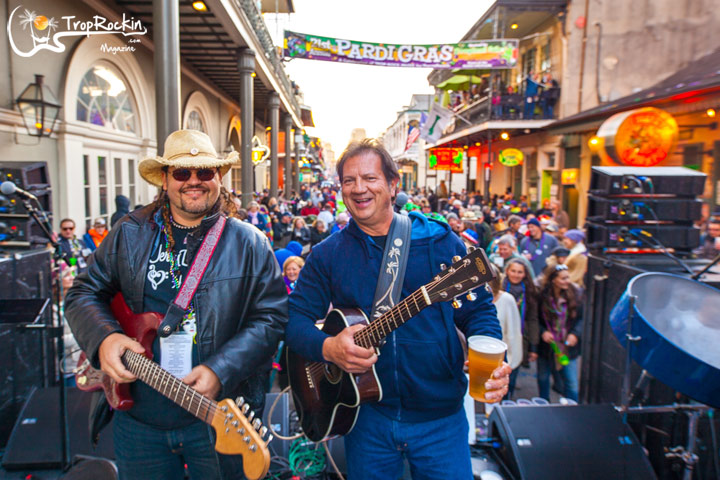 The Pardi Gras Street Party is always a favored highlight of this 4 day Trop Rock music festival. Pardi Gras Parrot Head attendees mingled with the New Orleans locals and tourists who were drawn out from the bars by the high energy concert taking place on Bourbon Street.

Donny and The Dock Rockers opened the show to a waiting crowd looking to get the street party started. Jumping right in, Donny Brewer kept the street lively with his original songs. Encouraging the crowd, a conga line broke out during Donny’s tequila themed song “Vitamin T” and he showcased his latest song about New Orleans inspired by last year’s fun at Pardi Gras. When Donny announced his song “Palapa Joe” everyone gave a huge round of applause as this song is inspired by a long-time Pardi Gras attendee Franklin Godowns. As the lyrics proclaim, Franklin really does know the words to all the songs.

Donny was joined by vocalist, Alyssa Vogel, who co-wrote “Footprints” from Donny’s Zimzala album. Alyssa graduated from Santa Fe University of Art and Design with what Donny calls “a triple threat” of Theater, Dance and Singing. It’s really no surprise because when it comes to the Brewer’s, music and entertainment just runs in the family (hopefully you were witness to Michelle Brewer’s, Donny’s wife, amazing performance at Pardi Gras!). Alyssa is attached to Donny’s son, Kai Brewer, who is credited with co-writing Donny’s song “Island Time.” If Donny Brewer isn’t force enough in the Trop Rock genre, we just might see Kai and Alyssa bringing their own style to Trop Rock in the future.

No matter the event, if you see Jimmy and the Parrots on the lineup you know it’s a party. Jimmy Mareventano and his band pulled the crowd in closer on the street and even brought them on the stage. Guitarist Mark “Big Daddy” Leimbach took a few turns as lead singer and drummer, Mark Sacco, stepped up with his rap song mash up.

Jimmy and the Parrots literally do it all. From Jimmy Buffett cover songs such as “Fins” with guest Trop Rock artist Dennis McCaughey who had the whole crowd leaning left and right with their fins held high. To original songs “Volunteers” with plenty of fans willing to help drink up the beer (or maybe Tropical Isle Handgrendes in this case).

A special presentation took place between the music to honor a fallen hero, New Orleans Police Officer Marcus McNeil. Earl Bernhardt and Pam Fortner (owners of Tropical Isle), Crescent Crown Distribution and Pardi Gras came together to donate $10,000 to the McNeil family along with a beautifully painted portrait of Marcus McNeil by Earl’s daughter Lisa Conroy.

The final Pardi Gras Street Party performance is always the event host Jerry Diaz and Hanna’s Reef. Singing the perfect original song “Come Down to Paradise” reminding us that no matter where we are Hanna’s Reef will take us to the tropics. Then channeling a little Kenny Chesney with “No Shoes, No Shirt, No Problem” and Jimmy Buffett with a Parrot Head favorite “Love and Luck.” Mark Mireles lends the tropical vibe with his steel drums mastery but what many people may not know, he’s got an amazing voice. Singing Earth Wind & Fire’s “September” with Kitty Steadman on back up vocals had the crowd on their feet.

Donny Brewer joined in for most of the Jerry Diaz and Hanna’s Reef set playing lead guitar and back up vocals. Then Jerry and Donny showcased their duet “Guys Like Us” where they readily admit they’re “not trying to save the planet” but they are doing their part in singing for a few dollars and entertaining their friends. You can find this duet on Donny’s Winnebago Tapes CD, but Jerry let the fans know it’ll also appear on his forthcoming CD. That got all of us excited!

Jerry kept the party alive continually rotating artists back to the stage and in particular, Pam Fortner joined in with Melanie Howe on percussions and the final finale is always a big fanfare with all the artists piling on stage to harmonize together.

The 21st annual Pardi Gras Street Fest was the high octane event of the weekend and Bourbon Street is a wonderfully iconic backdrop to feature Trop Rock music. The entire weekend was filled with unique attendee involvement, amazing musical talent and a festival every Parrot Head should experience. The 22nd annual event dates are January 17th – 2oth, 2019, put it on your calendar. You don’t want to miss it.

Another awesome day at Pardi Gras! Thanks for the great coverage!