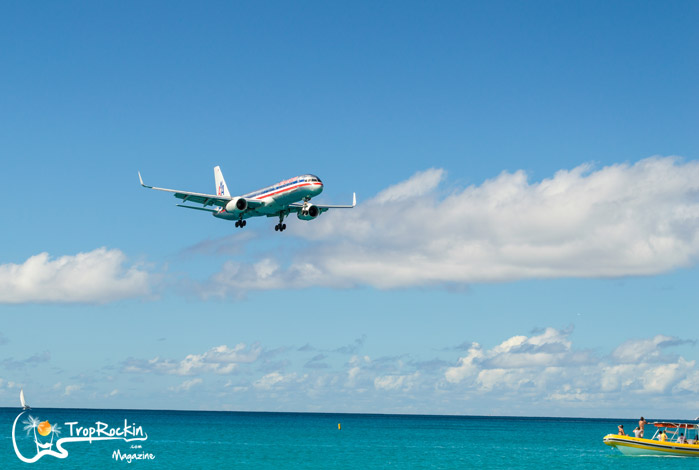 While the Sunset Bar & Grill in St. Maarten probably has excellent views of the sun setting, that’s not why most people go there. Hundreds of people are bused there daily from the cruise ships in Philipsburg because it is located right off the end of the runway at Princess Juliana Airport. When I say “right off the runway”, I’m not exaggerating. The corner of the end of the runway is maybe one hundred feet from this St. Maarten beach bar.

What makes plane watching so much fun at Sunset Bar & Grill is the proximity to the planes. You would never get this close to the planes at a US airport. There is just one runway which runs east/west. Since the wind always blows from the east in the Caribbean, planes always land and usually take off from west to east, into the wind. The end of the runway is about ten feet from a street, separated only by two chain-link fences. On the other side of the street you have Maho Beach. There used to be much more beach at Maho Beach, but Hurricane Gonzalo in 2014 eroded much of it, leaving less beach now and many exposed rocks. That hasn’t stopped the cruise-ship tourists from still flocking there to watch the planes. 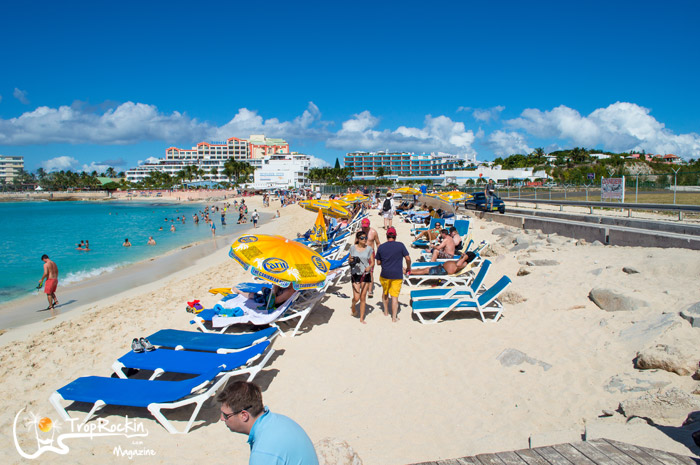 The beach prior to hurricane Gonzalo. 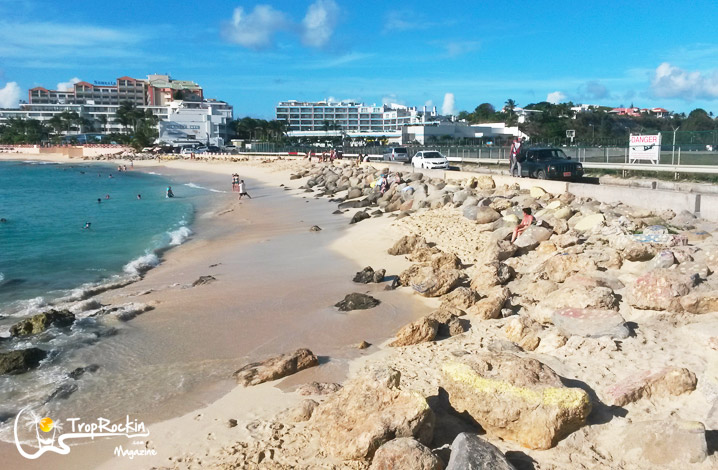 The beach after Hurricane Gonzalo.

There are two aspects of plane watching in St. Maarten; landings and takeoffs. The landings are not dangerous but they are exciting. Looking west you can see the landing lights on a large jet several miles offshore. At 7500 feet, the runway is not particularly short, but the large planes, touch down as close as they can to the end to allow for plenty of stopping distance. The result is they pass over the beach perhaps a hundred feet or less off the ground. When you stand on the beach watching that large jet approach, that hundred feet looks more like ten. It’s hard to resist the urge to duck.

Takeoffs are the potentially more dangerous activity. I say potentially, because they are only dangerous if you are crazy enough to get behind the plane. There are two ways to hurt yourself during a takeoff; The extremely stupid will actually hang onto the chain-link fence directly behind the plane and see if they can hang on throughout the takeoff. Most of the people who attempt this stunt either lose their grip and literally blow away, or they just can’t stand it and let go.

Either way, they likely end up rolling into the street risking cuts and bruises and possibly hitting their heads on the concrete curbing. Fortunately, the traffic usually stops during takeoffs because people don’t want their cars getting sandblasted. The other takeoff activity is standing on the beach. This is slightly less dangerous, as all you are subjecting yourself to is a jet induced microdermabrasion treatment. When you can’t stand up anymore or just can’t stand it anymore, you roll or run into the water until the plane is gone. 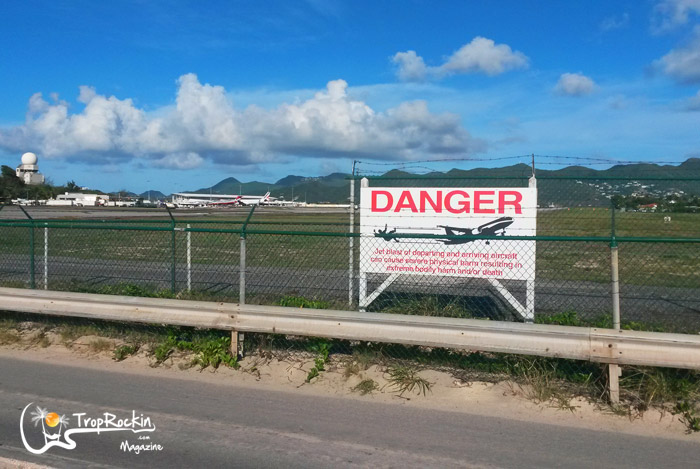 There is a wide variety of planes coming and going at Princess Juliana. Numerous small propeller driven planes come and go from other Caribbean islands. They don’t provide much excitement. There are about ten large jets (737’s, 757’s, or MD80’s) that arrive every day from the States, and that number doubles on weekends when the bulk of resort tourists come and go. But, the holy grail of plane watching at Sunset Bar & Grill is the daily KLM 747 from Amsterdam and the daily Air France A340 from Paris.

If you aren’t familiar with your aircraft types, these are what are referred to as wide-bodies, and they are huge. Their landings are more spectacular because of their size and the fact that they try to hit the very end of the runway. Their takeoffs are cool because they come to the very end of the runway, turn to the east, and then hold the brakes while they crank up the jets. This give a few seconds more blast to the crazy people attempting to hold on in the jet blast. The two big planes are also much louder, both on takeoff and landing, adding to the excitement. 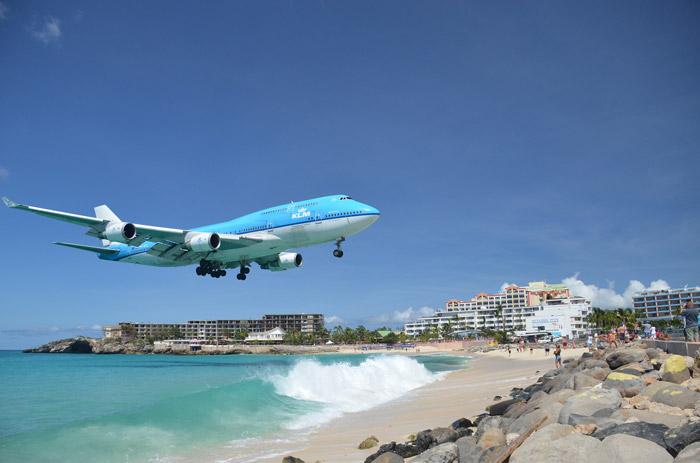 Photo by alljengi / CC
Beach goers gather on the beach underneath the KLM airplane as it comes in for a landing.

What else is there to do at this St. Maarten beach bar? Oh yeah, its a bar and restaurant. The circular bar seats about fifteen people, there is high-top and rail seating for another twenty or thirty people in the bar area, and then there is picnic table style seating for about fifty people intending to eat a meal. The whole area is under a roof and the sides are open to the warm Caribbean breeze. For drinks, they have a seemingly unending supply of cold beer, with the usual Caribbean options of Carib, Presidente, Amstel, Heineken, Guinness, and others. 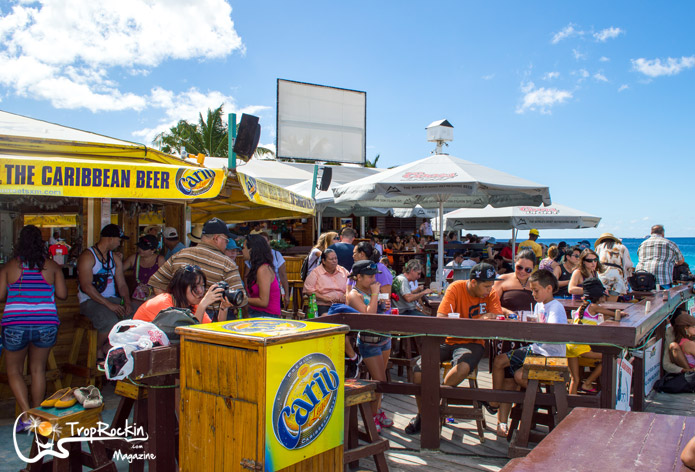 They also have a full bar with a wide selection of fruity rum drinks. The beers are $3 or $4 and the fancy drinks are mostly $7 or $8. Their menu is good and includes breakfast lunch, and dinner. I have never heard anyone complain about the food here. My personal favorite is the tuna steak sandwich, which is an 8oz inch-thick steak, seared rare (or however you like it) on a bun with lettuce, tomato, onion and a spicy sauce. The whole place is a fun party atmosphere, with music playing loud enough to hear but not stop a conversation (the planes do that). There is a surfboard shaped chalk board in the sand with the day’s arrival times written on it, and ladies bold enough to can drink free when they sit at the bar topless. 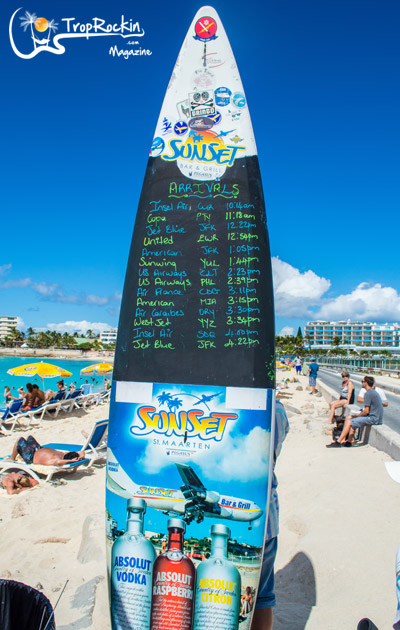 When we last visited, in Nov 2015, there was an expansion project going on. This will include new bathrooms (which were located in a portable trailer across the street currently), an expanded gift shop, and I assume more seating. If you visit St. Maarten, whether by small boat, cruise ship, or are staying there in a hotel or condo, a visit to the Sunset Bar & Grill is a must. Most of the big planes come and go between about noon and 4 PM, so plan accordingly. You can check the fight schedules, menu, more pictures, and other details at their website: Sunset Bar & Grill.

Love the beach bars in St Maarten, been there a couple of times. Great article Chris. Hope to go there again !