By: Author Tammy Camp - Links in this article may be affiliate links. As an Amazon Associate, I earn commission on qualifying purchases.

Crown Apple and Lemonade is one of the best drinks with Crown Apple. It’s light, refreshing and very tasty. The flavor of Crown Apple really enhances the tartness of lemonade by adding a slight sweetness from the apple infused whisky.

One of the best features is how easily a Crown Apple Lemonade drink is modified with different ingredients to slightly change the flavor and texture to your liking. These 4 Crown Apple and Lemonade recipes are all so delicious, it’s hard to pick a favorite! 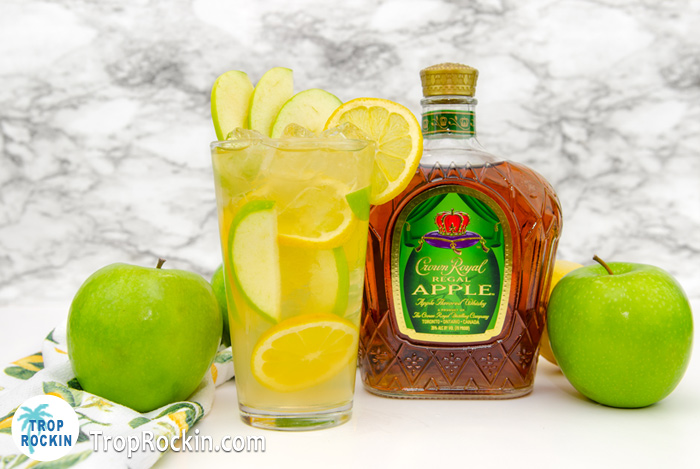 Drinks with Crown Apple are simply delicious! Crown Apple is a very smooth flavored whisky that mixes well with so many mixers. For a refreshing summer cocktail, Crown Royal Apple and Lemonade is a perfect combination.

The sweet and tart lemonade with apple whisky adds just the right amount of fruity flavor to the cocktail. If you’re looking for more fruity drink recipes, try this yummy Crown Apple and Cranberry drink.

Check out these 4 different Crown Apple Lemonade recipes. Each one creates a different flavor or texture and all are delicious.

Simple and easy are my favorite kind of drinks with Crown Apple! This 1st recipe is straight forward with just two ingredients: 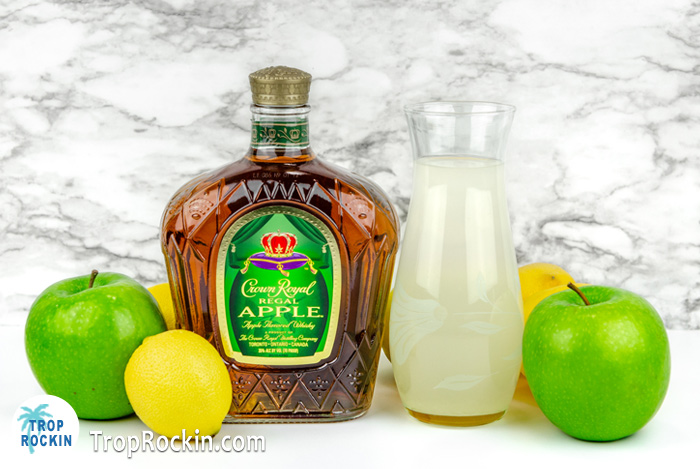 Garnish is all about a beautiful presentation and it makes a simple drink look fancy!

If you’re making this drink for yourself to sip on at home or out by the pool, you’ll probably want to skip the garnish. Although, I do enjoy eating the apple slices after they’ve soaked in the apple whisky. So, maybe add just a few to your drink. I like to call this a cocktail appetizer because it’s an all-in-one drink and snack.

No time to make a Crown Apple Lemonade right now? Save it for later and pin it! 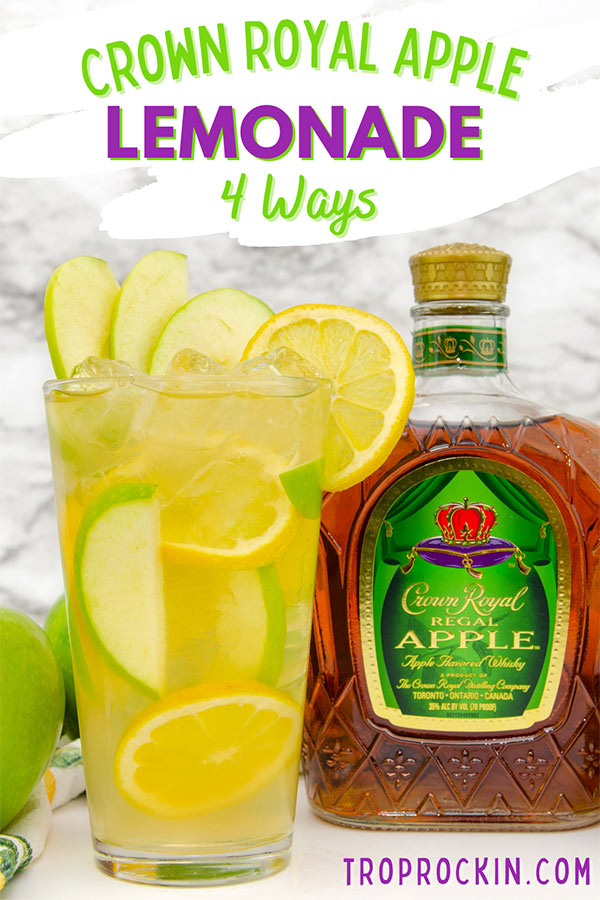 If you’re hosting a party or serving guests, by all means, add the garnish. This extra little step takes hardly any time and it looks as though you’ve really gone out of your way to make your friends a special treat.

For a pretty Crown Apple and Lemonade, you’ll want to add apple slices and lemon wheels in the drink itself. Then add a few apple slices on top with a lemon wheel perched on the edge of the glass to finish it off.

How to Make a Crown Apple and Lemonade

Step by Step Instructions for all 4 whiskey lemonade recipes are below.

To get thin apple slices, start by cutting the apple in half but not right down the middle of the apple. Cut from top to bottom just slightly to the side of the apple core.

Next, place the apple flesh side down on your cutting board. Then start slicing thin cuts from the outside side edge. 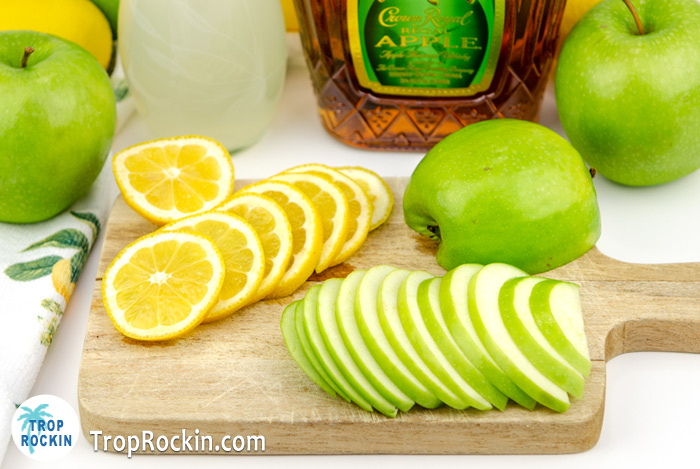 Start with a lemon wheel at the bottom and add a few ice cubes to hold it in place. Then add apple slices and lemon wheels alternating with ice. This will hold the fruit slices in place instead of them all floating to the top. 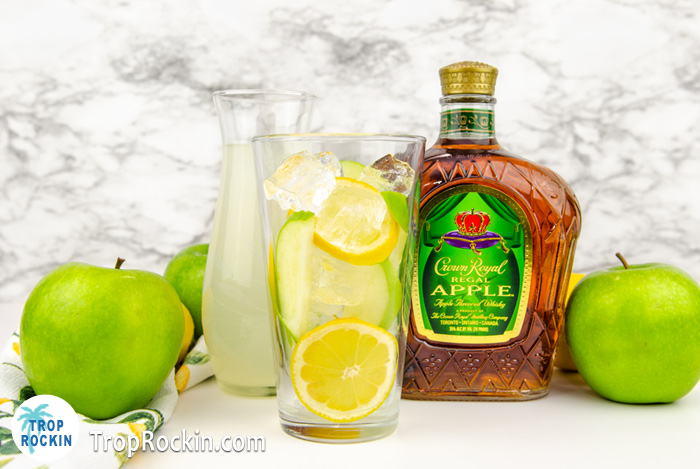 Step 3: Pour a shot or a shot and a half into the glass.

The whisky blends so well with the lemonade you can barely tell it’s there. You’ll taste the apple flavor, but not a strong whisky flavor. 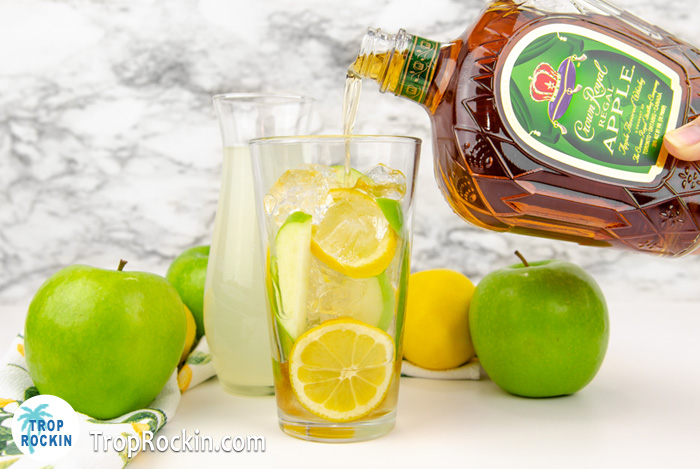 Step 4: Fill the rest of your glass with lemonade. I like Calypso Lemonade or the Simply Lemonade brands. They are both delish! 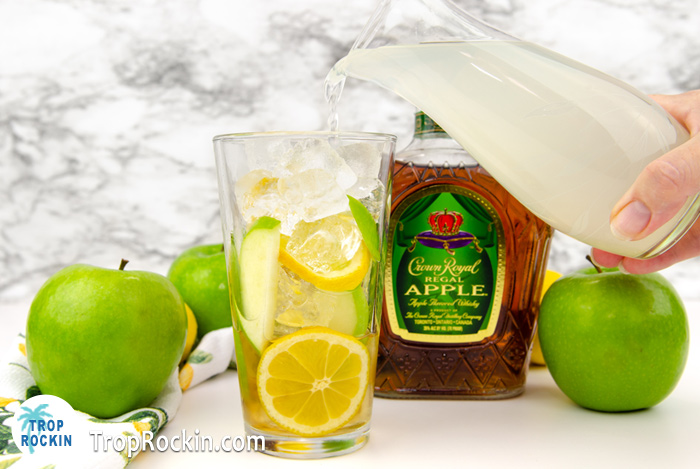 To make an apple slice fan, use a toothpick or a pretty stainless steel cocktail skewer to hold several slices together. 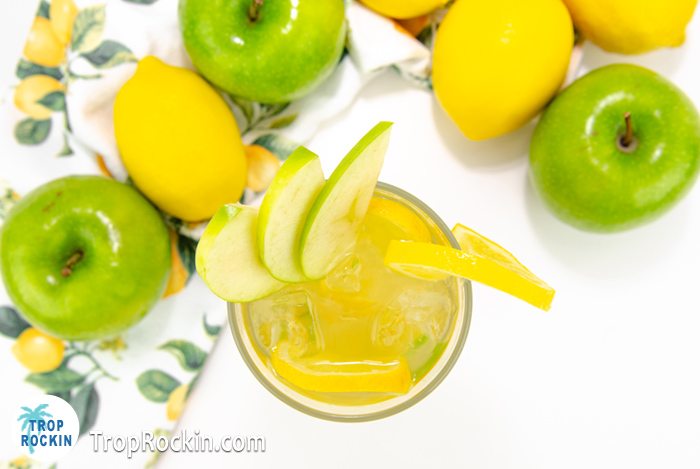 This second recipe adds a touch of bubbly to the drink which makes it seem more like a cocktail. Maybe it’s just me, but I love a little fizz in my drinks! 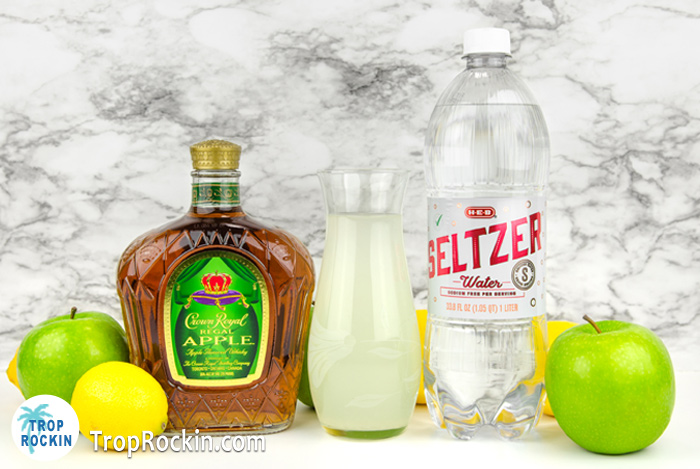 For this recipe, cut back a little on the lemonade and top with bubbly seltzer water. I chose a non-flavored seltzer so the drink still tastes like apple and lemonade with a light fizz. I think a lemon-lime flavored Seltzer would also work perfectly and add more citrus flavor. 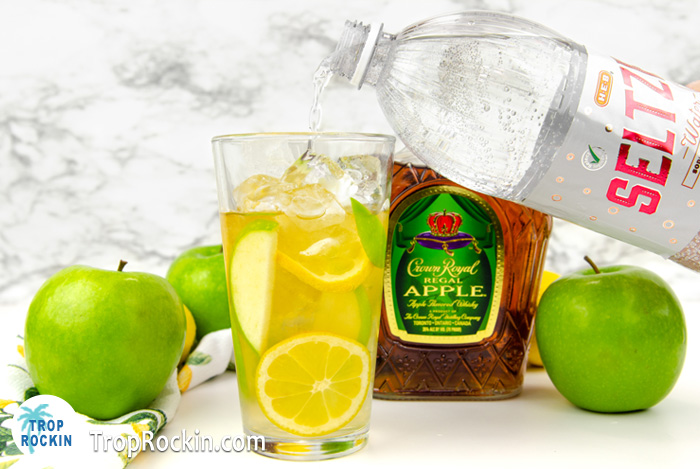 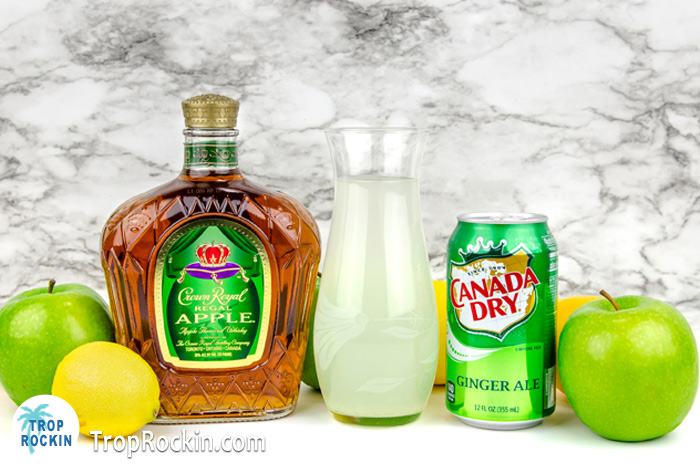 Again, cut back on the amount of lemonade and top with ginger ale. The fizzy texture and added ginger flavor is delicious. This variation still lets the apple whiskey come through, so don’t worry that the apple flavor will disappear.

The ginger ale adds another layer of flavor that mixes perfectly. 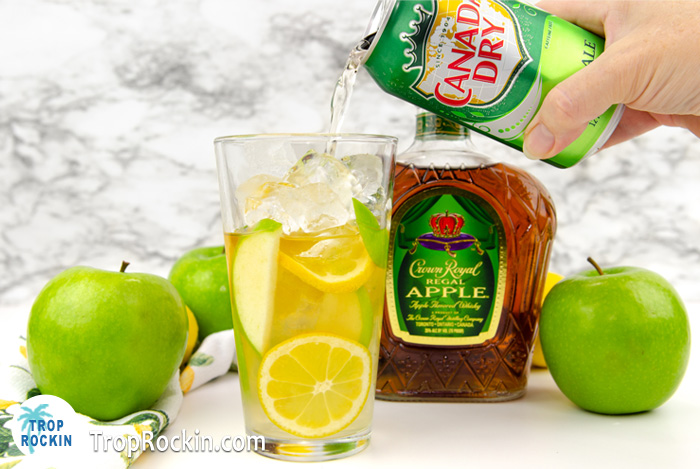 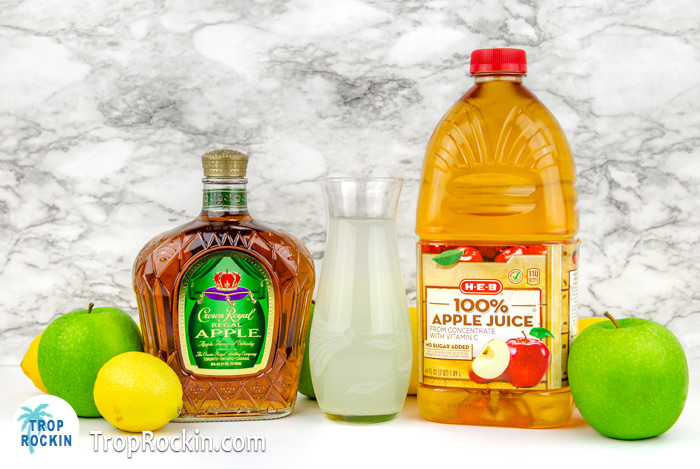 This might be my favorite combination for this drink. It’s hard to choose, but I love how the added shot of apple juice pumps up the apple lemonade flavor.

To make this variation, cut back on the lemonade just enough to add one shot of apple juice.

There you have it! Four ways to create refreshing lemonade drinks with Crown Apple.

Each has its own flavor profile yet keeping the dominant flavors of Apple Crown and lemonade. 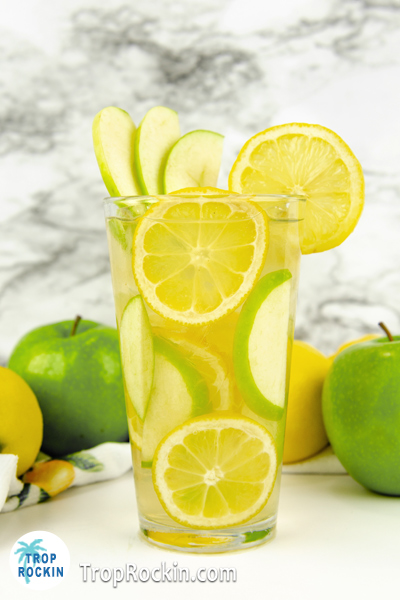 Try all these Crown Apple Lemonade recipes so you can pick your favorite combination. You could even combine ingredients from the different recipes for new drinks with Crown Apple.

No matter which Crown Apple and Lemonade combo you choose, you’ll have a refreshing cocktail to enjoy. 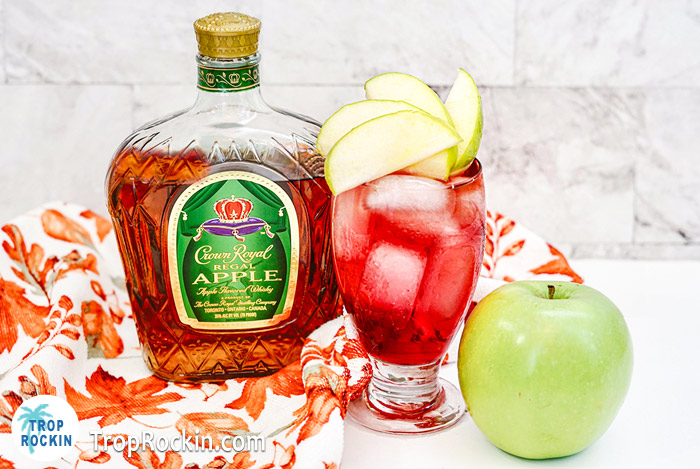 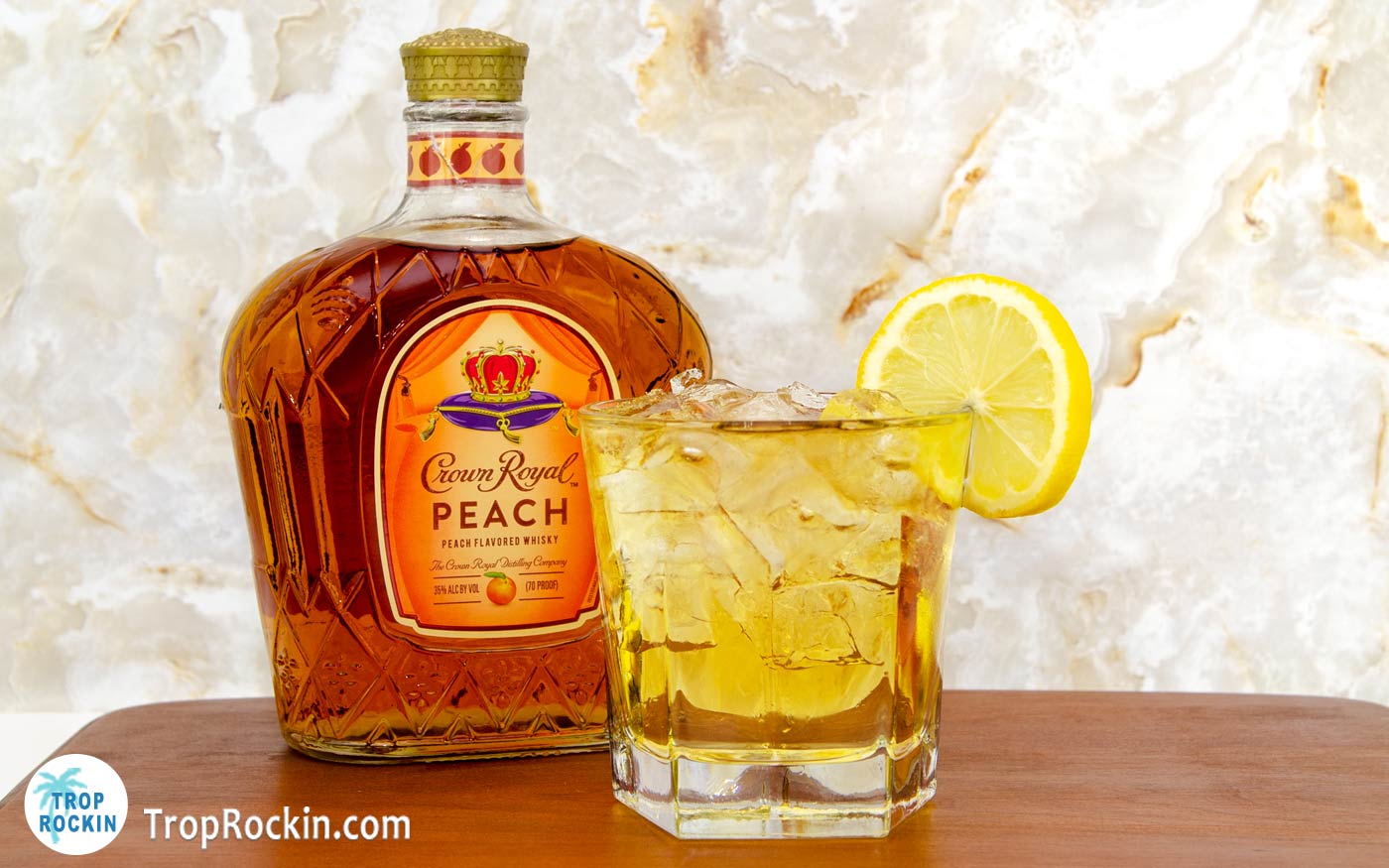 Next
Crown Royal Peach and Sprite